How To Brew Beer In A Coffee Pot - part 3

I thought I'd take you on a little photographic journey and show you how I learned to Brew Beer In A Coffee Pot. Now the beer we're talking about is a Gruit Ale and it has several characteristics that make it very different to the standards way of making a "Malt Barley, Hops..." type beer.

Now, my coffee pot is a Phillips Cafe Cino, 4 cup Coffee Maker so the first step is to guestimate the amount of grain we'll need. In all the other posts on how to brew beer in a coffee pot, the total water bill is around 2L at the start of boil. Or, roughly 1.5L by the time we get to the fermenter. I know that for a 15L batch I need about 5 kg of grain, that's a 1:3 ratio at the fermenter end. Scaling that, we can take a pretty good rule-of-thumb guess and say, "Ok, I would probably need 500g of grain" that's about 2.5 cups of pearl barley! not in my coffee maker alas. That means, less grain and some adjunct like "Golden Syrup" of "Black Treacle," Cool! Let's see what the S.G is after the boil.

This Gruit Ale Recipe is my own creation, based on my past experience in brewing beer and what I've read online about the style, and it's a tricky thing to come up with something that might work - it's all well and good to hypothesize and prognosticate on what to do, but experience usually will out. So here we go:

Considerations:
Starchy grains - all barley or add some others as well? Why add grain adjuncts? Flavour Profile, colour, taste characteristics
Bittering agents - The typical Gruit Ale used sage, juniper berries, wild rosemary, mugwort, and a few other esoteric items. All I've got is the first two. Ok, how much? both or singly? addition schedule?
Adjuncts - sugar, dextrose, honey, corn syrup, golden syrup, black treacle, maple syrup - how will these work with the end flavour?
Enzyme activity - since we're not using malted grain how do we get the enzymes in to process the starches to sugars?
Malt flavour - do we want a malty flavour in this beer? How do we put it in? Vegemite? It's a yeast extract and I love it but it's isn't going to give me that malty flavour but the salt may contribute to the mouthfeel of the final beer. I've got Horlicks, but its a milk additive, ok let's try out a "milky beer."
Size of the mash tun - a 4 pot coffee carafe doesn't take much and given the nature of the possible grains, they'll expand at least double their size in volume when soaked in water. 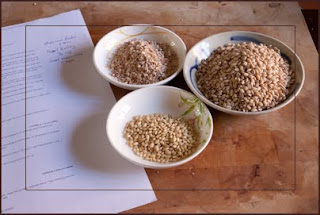 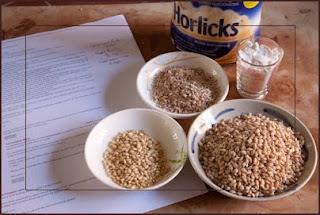 Collect all your dry ingredients together 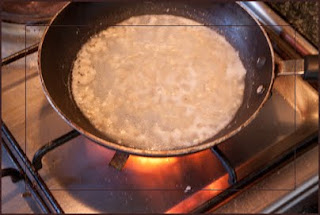 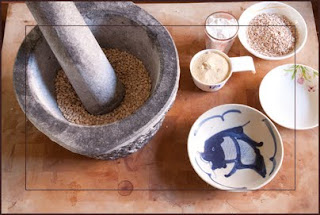 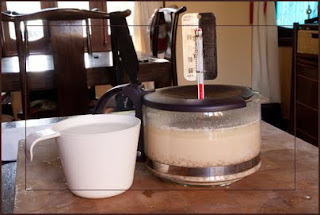 Add the all the dry ingredients to the carafe with 2 cups of Coffee Maker-warmed water. Note the temp is approx. 45-50 deg C, not bad for Mash In 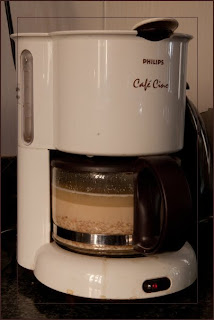 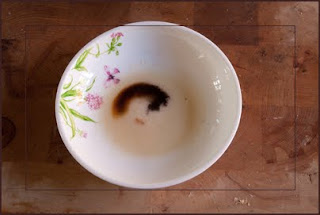 Iodine Testing is usually done once, to see if you've reached the Mash Out point. Here's an example of an Iodine Positive result. i.e. there is still starch in the mash and the sugars have yet to fully convert. 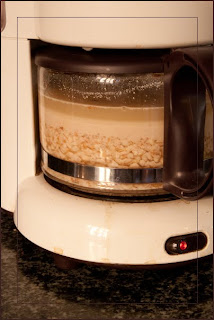 After about 2.5 hours the temp has finally hit around 78 deg C which is normally Mash Out temperature, so if it ain't converted to sugar now well, "Too Bad!" So a quick Iodine Test 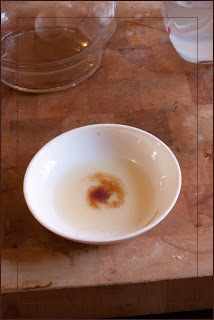 and we have more or less full conversion. After leaving the iodine in for about a couple of min there were a few tiny, tiny specks of black - nothing to worry about.

Pour off the top liquid, separate the solids and then Sparge the grains into a 2L+ capacity pot by pouring two cups of coffee maker heated water over the grain sitting in a drip fine mesh strainer. Repeat with another 3 cups. The original method called for doing this in the coffee maker bean hopper but with this Gruit Ale recipe, ultra fine solids from flours and milk solids create a Stuck Mash issue causing water to overflow the coffee maker. Not Good.

Now put the resulting wort onto the stove top and bring it to a rolling boil. Add 1 tspn of Sage and 6 squashed Juniper Berries. after 45 min. Add another 6 squashed juniper berries and boil for a further 15 min 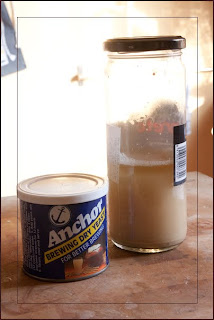 While you're waiting take 1 tspn of Brewer's Yeast and stick it in a jar with a cup of water to rehydrate. Give it a good shake to help wake the little buggers up. 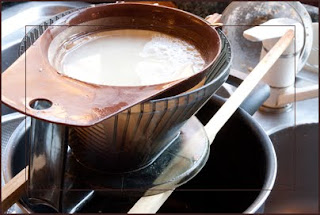 Vigorously stir the wort, allow it to settle and pour off most of the liquid. Filter the remaining solids through a fine coffee filter...


The filter isn't working! "Why is it so?!?" Professor Miller I need your help! The bread improver contains among other things, corn flour, which is a real sticky beastie. The Horlicks also contains a number of floury solids that also contribute to the stick, then there's the rice and the pearl barley both of which are notorious for gluey, porridge-like consistencies. And guess what! they clog the pours of a fine filter very quickly, easily and stop any liquid from passing through. So what to do? 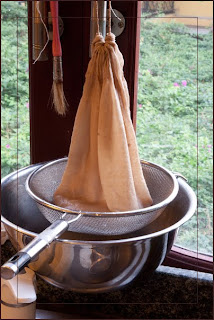 Well, there's nothing else for it but to pass the wort through several, progressively finer sieves, and muslin cloths until a similar cloudy constancy to your yeast has bee achieved. Hopefully the remainder with floc out with the yeast in fermentation. Here is one stage where I used a muslin bag. 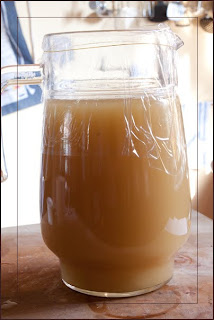 Finally put your wort into a fermenting vessel, add your yeast and cover with something. I decided to use plastic wrap. Make sure you agitate the wort well to get lots of air into it, then put it in a stable, room temperature warm, dark place and leave it alone.


Until the next time,