How To Brew Beer In A Coffee Pot, Part 4

Well, its been a while now, the ale finished fermenting and now its in the bottle. Three to be precise.

So, here are the pics:
Final Gravity of around 1015 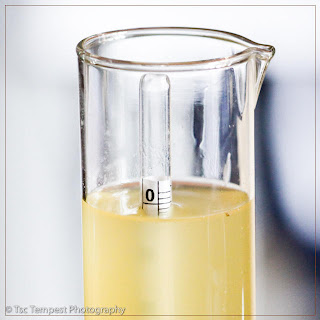 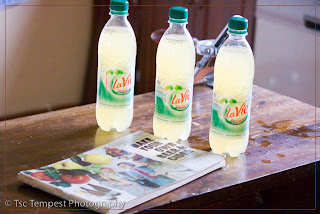 Addendum - Tasting Notes. (Dec 10)
We cracked the top off a bottle around the end of the month but the flavour was a bit thin, sour, the ale lacked body, the aroma wasn't particularly pleasing and there was lots of carbonation. I left it for several more days and tried another mouthful - terrible! Followed by two days of feeling wretched - food poisoning!

So, troubleshooting this situation: The process works fine, and does what its supposed to do. You can brew in a coffeepot. However, making a Gruit Ale, based on the possible ingredients you'd find on a moderately sized oceanographic research vessel, is quite risky and not recommended.

Of course there are issues here; the most likely cause of the possible contamination is poorly sanitised plastic bottles. Another factor is that of preservability of the ale whilst conditioning in the bottles and this harks back to the choice and quantity of bittering agents used.

This experiment deserves to be repeated using proper beer ingredients and excellent sanitation practices but I don't think I'll be trying another Gruit Ale either with a coffepot or in some bigger system.So, until the next time,