Well, here's an update. The test beer fermented out quite quickly, or so I thought. So, I racked it to the secondary added a touch of nutrient and popped into the fridge. Guess what? it started fermenting again! I guess the ambient temperature the day after pitching was too high and caused a stuck ferment. The temp drop got it going again and I left it there for almost a week. I recon I could have left it there longer, but I'm off to Singapore for a few days and figured, why not, lets test the keg!

NOw the keg came up to me from HCMC via Dean of The First Hobby Brewer Club of HCMC. I added 200ml of primer (unfermented wort collected from the Open Day Brewup) and put it all into the keg which was washed, then dosed with Sodium Hydroxide and then rinsed with water and iodine. The total volume was around 10L of beer.

So, now its in the cuppoard and we'll see if it conditions, some say theres a problem due to insufficient sealing of the o-ring when the keg is under-preasurised, thus developing CO2 escapes out rather than carbonating the beer. We shall see what we shall see.

I also took some time to put the Open Day Brew into bottles. In the end, I bottled in 16 Grolsch bottles, 2 Flensberger 'Mini' bottles and one HB Munchen bottle, these brown glass bottles will serve well as samplers, I recon.

So, there it is, from grain to glass (so to speak) The beer's in the bottle!

Its a funny hobby this, “wanting to make beer” hobby. My journey as a brewer could not be described as typical, but certainly it also would not be considered unusual. I’ve participated in making beer with others. I’ve made some beers on my own. I’ve read forums, I’ve listened to the podcasts and watched the streaming vids; I’ve even poisoned myself! But I’m still here, plugging away, always learning, trying, refining the process and my system for making good beer. As I said, nothing unusual.

Unlike many home based brewers, hobby brewers, and other craft brewers, I don’t brew in the garage, or in the front/back yard, on the patio, or in the kitchen. I tried to but; well, my garage is a car port which serves as entry to the house and kids play area; My kitchen, whilst sizable and usable does not have the storage support necessary for the scale at which I wish to brew; and, we have no front/back yard or patio, or shed: and as we all know, “All Australian boys need a shed;” so, my space is a top floor, sun room and all my brewing junk is kept in the one place. I call that space, “The Herald of Change Brewery.

Now some people meditate with their eyes closed, others relax and listen to music, chant a mantra or focus their eyes on some mandala, me? I kick back on the couch in my brew space and gaze at my brewery, and think: think about the pots, the tubing, the lab, the little bits of lab equipment, the malthouse, the grain in stock, the fermenters, the fridge, the cleanup area, the benches... the list goes on. I think about how to improve things, simplify things, get the next bit of equipment - And I caught myself! I realized I’d been caught up in the home based brewers equivalent of an “arms race.” It’s a question of scale.

I’ve made beer in a coffeepot - a lovely maple beer, and a poisonous gruit ale debacle; I’ve brewed on the kitchen stove;

Brewing on the Stovetop 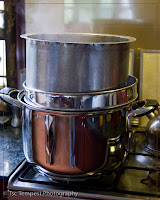 and, mashed in a cooler bucket and multi-step mashed in the same; 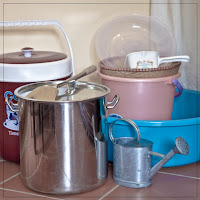 I’ve bought various s/s pots of differing sizes and three tiered the brewhouse with various combinations; I’ve even built a kit system for others to start out with making 10L of all grain beer!

All Grain Brew In a Bag Starter Kit 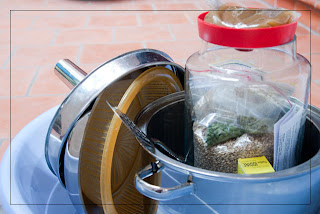 Each system had its nuances and as you mingle with old hands at the game, its easy to be discouraged by others who have bought into the bigger is better argument: it takes the same time to brew 50L as it does 10L; 10L is not self-sufficient, but 100L is... etc.

What struck me is that many of the people who have the larger systems only brew once or twice a month. I’m a stay at home dad. I’m lucky to have a wife who not only works but is also supportive of my hobby. I can brew almost any day of the week; i.e. I can brew more than twice a month, and twice on the same brew day! So the question of scale must be augmented by a second question, one of frequency.

Recently I opened my brew space formally. I needed to get into it and working with it and making beer. So using what I had, I built a 19L (5gal) three tier system using a modified 27L cooler as a MLT. Straight away I instin

ctively wanted to step mash with it which meant using hot water additions. Now, with a bit of math its not too hard to work out what the additions needed to be but it IS a complication that is tricky and fiddly. My mate was not impressed with this and thought it just a gimmick, that its not possible to make GOOD beer in a repeatable way with such a system - he’s a 1516’er and I like that about him, it helps to maintain focus and perspective. So, I replaced the cooler with a burner and another pot, which increased the system capacity to 28L (10gal.) Approval! He said, “Now, you can brew any beer you could possibly want.”

But here’s the question, do I want to brew any beer I could possibly want, or just the beer I’d like to drink? and, does single step vs multi-step really make a significant difference when it comes to brewing the beer I want to drink? Thus the issue become more muddied... Choice of beer style and choice of malt directly influences the choice of equipment, and the size of the equipment is influenced by spacial constraints and frequency of brewing. Then, there’s the issue of self-sufficiency - do I want, or need, to make enough beer that I don’t need to go to the shop and order a typical mega-swill? Again, a factor that influences size and/or frequency.

I set up The Guild to share information and resources about brewing good beer at home. It has been a driving factor for me to acquire knowledge, and experience as a brewer so that I could share it with others. it has also driven me to seek out suppliers of equipment and ingredients to solve technical issues and problems associated with trying to brew in Hanoi. It has even led to me offering to provide a equipment purchasing & training service to new members of The Gu

ild who would like to start brewing their own beers.

But it has also drawn me away from my primary focus, to make beer, good beer, repeatably, for myself. So, I sit on the couch and stare into the distance,

The Herald of Change 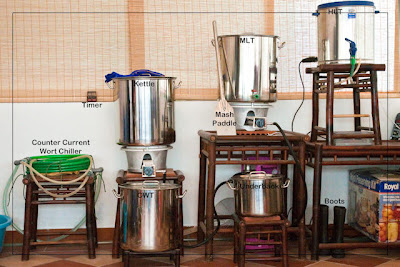 beyond the HLT, MLT, Underback, Kettle, Chiller and CWT... and think, “What next?” Single Tier? I’ve got the pumps; Automation? What size pots? What happens when there’s no power? Some more Stainless Steel? Plastic or Silicone Tubing? Keg System? Fermentation Control? Fermentation and the risk of Light Strike...

... And slowly it dawns on me, I need to get back to perfecting recipes, just making beer, repeatably. The space works, everything is in place except for some iron benches to replace the bamboo tables and stools, but it all works. It’s all in order. The workflow is streamlined, efficient and orderly.

Its so easy to get caught up in the Brewers Arms Race, to be misled by ambition and loose sight of one of the most important aspects of making beer, and that’s the simple effort of actually making it, regularly, to build experience by doing over and over again like anyone who wishes to gain mastery of a skill that requires both physical presence and effort.

I’ve done what I need to do for The Guild. There is a pathway in place for new brewers to follow. Its time to do for myself. Its time to start making beer.

Its Your Shout, Mate!

The Herald of Change Brewery

Last Sunday I launched my new brewspace - The Herald of Change Brewery, by inviting members of the Hanoi Handcrafted - Brewers Guild to come along and participate in the making of some beer. One of the attendees, Dean Anthony is the founder of Hobby Brewer Vietnam, another, Peter Lentes is the first hobby brewer in Hanoi. The third attendee was Alex Graham, who is one of the early adopters of my All Grain 10L Pilot Brewery Kit. As luck would have it, a few days before the opening, VTV4 contacted me and asked if they could do a segment for their "Expat Lives" program. [See the video below...]
The name of the brewery took quite some time to work out. I was looking for a, 'Ye olde worlde' type pub name like "The Farmers Arms," or "The Pig and Whistle," or "The Bearded Clam," but nothing sat quite just right. Then it hit me like a ton of bricks, many people use their own name, e.g. Peter's Extra; to label their beer or brewspace, so why not mine? It just didn't have quite the ring I was looking for, but the meaning of my name did - Herald of Change.
Taking the initials led to an additional, unexpected pun, THC - another intoxicating substance; I was sold; the name had been found, and it was good!
My brewspace is a 4 by 5 meter room. It is set up with:
- a malthouse for grain storage and milling
- a brewhouse for the mashing and boiling of wort
- a wetshop for clean up and washing of equipment
- a cellar for the fermentation and storage of packaged beer
- a warehouse for the storage of empty bottles, kegs and miscellany
- a laboratory for yeast cultivation, storage, and starter preparation
- an office for recording brewday data, and inventory management, and
- a couch for sitting on and gazing at the whole system - quite meditative really.
There's an insulated keg that serves as a nice beer table and magazine rack and the rest of the middle room space is kept open and clear of clutter. All in all its a very orderly and easy to use space.
The brewhouse s , at present, for the purpose of moving forward and making beer, a three tier, single step infusion mash system built around a insulated cooler with braided hose as a manifold. Trouble is I keep trying to multi step mash in it - I've even calculated the temp absorption by the cooler and the individual water additions for a 5 step mash program and not blow out the 27L capacity of the cooler.
The current plans are to replace the existing bamboo tableware with stainless steel or painted iron, purpose built benches; and to replace the cooler with a 2nd burner and 40cm stainless steel pot; and, the transfer pipes will be replaced with silicon tubing. But, the need is to get going and brew, replacements can be integrated along the way but can't be allowed to stop the brewing process, hence the Opening last Sunday.
Hope you enjoy the video:
Until the next time,