Well, here we go with a couple of Bia Hoi Trials. This recipe was given to me by a good Brewer friend of mine who runs a chain of craft/micro breweries of the Czech-style in Hanoi. The recipe I'm using here is a generic recipe which was the outcome of a discussion over the phone. [output from QBrew]

Now this was an interesting brewup. At Dough In 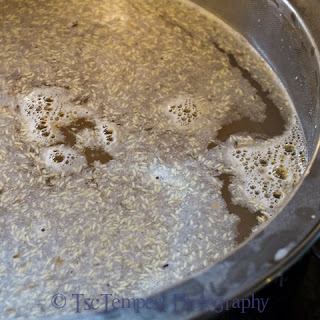 I took a refractometer reading (all measurements given as corrected) and got 1.004 S.G.  [In this pic you can see grains of rice floating on the water.] 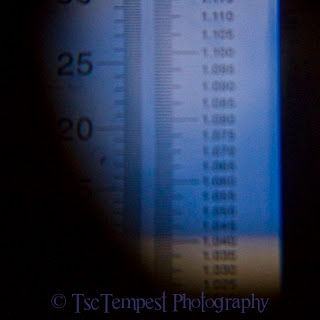 the reading was 1.043 S.G (Pre-Boil Wort Gravity) [its hard to get the camera focused properly whilst looking through the refractometer. Sorry about the quality of the image] and Post-Boil the Gravity was 1.063. After cooling, I added approx. 3L of water to bring the reading back down to 1.034 which, for this recipe is pretty well spot on. This addition reduced the bitterness of the wort which post-boil was very noticeable - I hope it mellows in fermentation as style wise this may be too bitter. (... may have to review the Style Specs., again...)

I split the cool wort into two equal sized batches and into one, pitched 6g of Saflager S-23 yeast that I'd emptied into half a glass of water the night before. I did the same thing with the other half batch but used Saflager W-34/70 yeast instead. 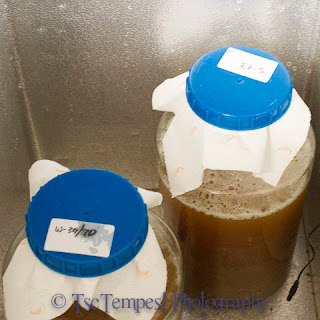 The fermenters were placed into a chest freezer, teperature managed via a Conrad UT200 Universal Thermostat set to 10.5°-12.5°C. You can see the sensor to the left. The fermenters are made of glass.

Style-wise, on discussions with some Vietnamese brewers, Bia Hoi is fermented with a neutral tasting lager yeast, most likely of Belgian (original industry development carried out by the French), German (technology transfer), Czech (technology transfer), Danish (Carlsberg) or  Dutch (Heineken) origin. As such, Most of my yeast is ALE yeast however I do have five European Lager Yeast strains in my store. They are  Saflager S-23, Saflager S-189, Saflager W-34/70, Wyeast 2042 Danish Lager, and Wyeast 2124 Bohemian Lager Yeast.

I originally got these to explore making an Australian-style Bitter or Lager such as VB, Melbourne Bitter, and Carlton Draft, because I couldn't find a source for the elusive, mythical, Pride of Ringwood Yeast. I did get the POR Hops though.

Back to Bia Hoi... S-23 is described as a yeast with fruity, estery notes, whilst w-34/70 is apparently the most popular industrial lager yeast worldwide, so it was logical to first try these. It should be noted that S-23's characteristics don't match the style, but it was too good an opportunity to do something side by side and then compare the flavour differences - Exactly how does, "fruity, estery notes" manifest themselves in a light lager? I want to KNOW that flavour.

Be that as it may, some observations from the brewday:
Iodine Test - I got this lovely Phoenix trail when I conducted my iodine test (10% Providon Iodine dropped into strained wort and left for 60 sec. before swirling.) The black spot in the center was a piece of black grit. I don't know where it came from.

Visual Inspection of the Wort - 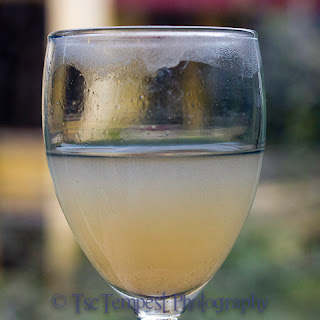 The pre-boil wort is really quite pale showing that not much colour comes from the grains. Contrast this with the post-boil wort, 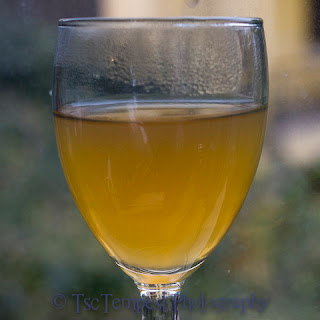 and it's much more golden colour. From this it's clear that a lot of the colour for this pale lager comes directly from the hops - Interesting!

Tasting Notes:
The pre-boiled wort was sweet in flavour, a nice malty tipple. The post-boiled wort however, Whoa! Bitter. Really Bitter. It had evaporated away enough liquid to end up at a gravity of 1.065 but the concentration of bitterness was like a bomb. With dilution, I'm really hoping this comes back closer to the style I'm aiming for. If not, I may have to completely revisit the hop schedule for this recipe and hop ratio for the style.

Ultimately, it is damn difficult to find a recipe and production instructions for Bia Hoi. There's a lot of misinformation abut, and those who do make Bia Hoi, generally tend not to share information or use the internet. As such piecing together such a recipe is like trying to read history, remember snippits of conversations with different persons with vested interests in Bia Hoi, and and filling the blanks with conjecture based on the current patterns visible in the puzzle.

This batch is really all about testing three things: the effect on available sugars by not cereal mashing the rice (requires comparison with a second brew where the same amount of rice is cereal mashed) ; testing the impact of the hop schedule on bitterness (requires tasting and side by side comparison with a local bia hoi variant); and assessing the impact of the strain of yeast used (fruity, estery, bready, yeasty, are flavour elements that are yeast attributes. So, which yeast is best to use?)

Many brewers have reported leaving their primaries on the trub for a month with no problems, actually reporting good clean up of off flavours, etc. On return and a week's dallying about, I discovered I'd lost the S-23. It had spoiled badly, so I ditched it. The W-34/70 still looked ok though, so I left it "for a few days" before thinking about getting it bottled. Wouldn't you know it, my temperature controller on my freezer decided to go on the fritz!

It was out for perhaps 24 hrs or so... Diacetyl rest? Perhaps. So, I reset the temp controller and left the bastard where it was. Then, we've got to relocate our furniture to Germany, the shippers were coming in, and I had one day, in which to clear out all the fridges and freezers - Sieben Swerge! What am I gonna do with this beer?

I quickly taste the green beer, it smells and tastes ok, a bit on the bitter side for bia hoi, but... prime some bottles with table sugar, get the beer into the bottles, 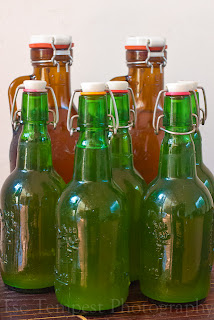 cap them and then into a bucket of room temperature water. If they exploded I wanted the bucket to keep everything in the one place. S.G. at bottling was 1.013 so i didn't move much in the intervening months. Ok, around 4.1% v/v not bad, a bit higher than target but... I'll take it as it is.

So, here we are, a week after bottling. I pop the cap on one bottle to see if it's gassed at all? 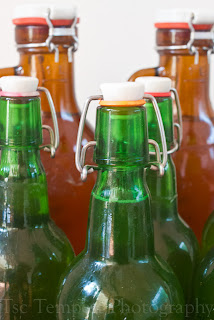 Yea! Nice little sizzle, rising bubbles and a misty vapour above the liquid. Good stuff, Now, I think I'll clean up the bottles, rest them another day or two and then get them into a fridge to chill down for a sampling.

So, Watch this Space!

A while back I wrote about how to make Bia Hoi. At the time it was the best information I could lay my hands on. Since then I've expanded my research and looked high and low for a style guide only to be frustrated by the amount of Urban Myth that surrounds the making of this style of beer.

Finally, after much deliberation, research and sampling I've pulled together all the disparate, threads of thought, on this beer style and I offer my summary of it here, for your perusal.

Preamble: Bia Hoi is the name for a Vietnamese style lager beer. It is often referred to as: Steam Beer, Fresh Beer, Draft Beer, or Cask Beer. It is predominantly packaged in stainless steel barrels and dispensed by roadside vendors, thus lending to it the appellation, Street Beer or Common Beer. It is described as an unpasteurised beer that may or may not be filtered prior to packaging and distribution. Bia Hoi is manufactured by large breweries, small breweries, small scale brewpub type operations, and village or 'backyard' entrepreneurs. Bia Hoi is best stored below 6°C and the optimal serving temperature is 2° - 4°C. Bia Hoi will rapidly sour if left open to the air at temperatures above 6°C.

Comments: Rice may be crushed and added directly to the crushed malt at dough in OR cereal mashed and added to the malt after the protein rest. Protein Rest at 50°-55°C for 30 min. Saccharification Rest at 68°-72°C until conversion completed. 2 hr boil. 1/4 hops at boil, 1/2 hops at 1 hr, and remaining 1/4 hops at 15 min. prior to flame out. Lager fermentation at 10°-12°C for 5-6 days. Beer may then be filtered and force carbonated to around 2.2V OR primed with sugar and tank conditioned for an additional 10-15 days (25 days max.) prior to packaging and distribution.

It's Your Shout, Mate!