Well, it's been a while since I started the Bia Hoi Experiment. Let's recap that. The idea was to make an authentic style Bia Hoi based on a recipe wheedled out of various sources and then put to the test in the brewhouse.

For all intents and purposes it should have been mild and unobtrusive in every manner. I failed. I neglected to stick to the time limit: 7-10 in the fermenter and then force carbonate and package. I didn't do what I planned to do. To some extent, circumstances conspired against me but, to be fair, I was too lazy and let circumstances get in the way,

The green beer sat on the trub in the primary for an entire month - one week plus the three weeks I spent in Australia after putting it into the fermenter. However, the fermenter was kept at 10 degrees in a temperature controlled chest freezer.

On return to my home I decided to crash chill the thing for transfer to a keg. 1-3 deg°C no problem. BUT,  I had no CO2 and I left it like that for another three weeks. Then I discovered that the temperature controller had failed - the chest freezer came up to room temperature around 30°C. Two days before I discovered that! Diacetyl rest? I reset everything and chilled it back down to around 2°C for another week.

No gas, all the furniture being moved, and the chest freezer needed to be emptied, cleaned and filled up with the stuff that wasn't being shipped to Germany. No choice Pitch in the toilet or prime and bottle. I cautiously tasted the 'evil' brew and thought, "not bad?" "Might work out after all." So, 3 teaspoons of sucrose per litre and on with the fliptops. BUT, I can't lager this stuff. OK, 24hrs at room temp and then into a bucket of water in a dark room.

The water maintained a temp of around 18-20°C Surprising really! Well, I popped the top on one yesterday, 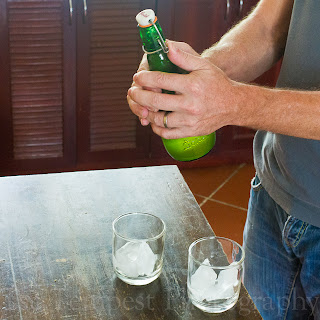 there was a decent sounding pop, its certainly primed, 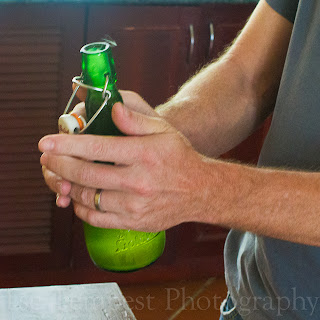 ah, that tell tale mist in the neck of the bottle, looking good... 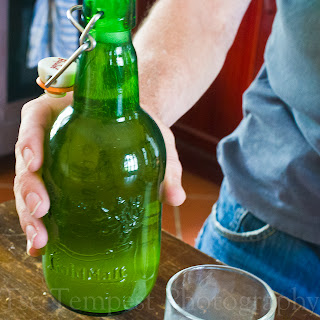 bubbles rise to the top before the pour, even better... 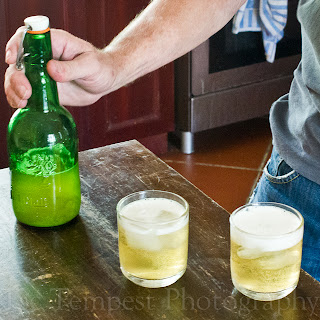 in true Bia Hoi fashion, I served it at ambient temp (well straight out of the water bucket) , over ice. 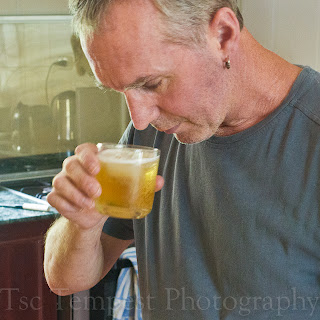 What a surprise! A little malty in aroma, and a hint of sulphur... 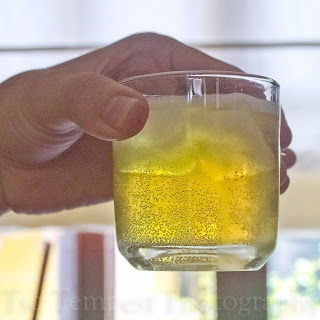 No sulphur in the taste though,  It tasted good!

All in all, a very deceptively easy beer to drink. Which, is dangerous because according to the production figures this delightful drink weighs in at 5.1% v/v or there abouts. As a fellow brewer said on tasting, we could call this an "Export" Bia Hoi. I like the term.

In post evaluation, thinking about the errors and what transpired in the making there are a few take homes from this experiment. First this recipe CAN produce GOOD beer, that is tasty and does not have a harsh rice bite to it. Despite the rice in this beer, it is not noticeable like it is in regular Bia Hoi - a taste that I really don't care for much, to be honest.

Next, the alcohol content is much higher than predicted and this can only be attributed to the length of time spent in the fermenter, either that or I have a enviously good efficiency value for my brewhouse - I doubt it!

From forum discussions about long fermentations on the primary, I can say that there appears to be validation and justification for just leaving the beer alone for 30 odd days  and for performing a diacetyl rest at the end of lagering, before bottling. this is all counter to the standard process of making "True Bia Hoi." A pity really, because this could be a decent beer if it was given the time and care to make it so.