'Biggles and The Red Baron' Ale.

This started out as a Mongrel Dog Brown Ale experiment. A dog of a beer: A mongrel in that it was made of bitsa this and bitsa that; Brown as I didn't have enough pale malt; And, an Ale because I'd exhausted all my Lager Yeast.

It turns out that someone else somewhere has brewed a Brown Ale and called it dog: Brown Dog Ale. But, I reserve the rights to, "Mongrel Dog Brown Ale" though, if that's alright by you  ;-)

In the end this dog of a beer has turned into a beautiful pale gold/copper red ale. It used German malts and, English hops & yeast. German, English, Red? Yeah, Biggles and The Red Baron just sandwiched me in a slam dance!

Grain Bill was 35% Pilsen Malt, 20% CaraAmber, 20% home roasted Amber Malt made from pilsen malt & guestimated as similar being to a Crystal 40, and 5% Weizenmalz. Grain conditioned with 3% water by weight for 30 min prior to milling, and milled using an industrial quality corona type mill with steel plates. The conditioning results in  larger pieces of husk while the kernel is shattered into smaller pieces and lower flour production - I like it, Nice! Must tra another crush using my stone mill and see the difference, I suspect more flour and shredded husks. But does that really matter with BIAB?  Ok, BIAB process, single infusion mash at 65°-70°C for approx 1 1/2 hours in 24l of Hamburg tap water. Pre-boil Gravity was 1.032 and Post-Boil was 1.039 (predicted was 1.025 and 1.031 respectively.)

Boil was for 90 min and the Hop Schedule was 15g East Kent Golding (EKG) at 75min, 7.5g EKG at 30 min and 7.5g EKG at 5 min for a total of 15 IBU estimated however on tasting it seems much more bitter than that. A hop sock was used to contain the pellets and the hot break settled out well resulting in very clean, clear wort on transfer. Cooling was Slow Chill (check out the No Chill Method for more info) using a stainless steel fermenter with weighted lid and air lock, left out overnight. Ambient Temp was 5-10°C o/n not including wind chill factor. Current daytime ambient temp in the shade is 12°C.

Due to the cooling method chosen IBU estimates need to be adjusted by an extra 20min (apparently) due to the extended contact of disolved hop element with the hot wort. Yeast to be used is Nottingham and Safbrew S-33 because the yeast is old and I want to use it up. (perhaps a flavour mistake in the making, we'll see.) Yeast Starter made using Vitamalz 'alcohol free' Malt Beer. The plan is to Ferment in Primary for 5-7 days, then Dry hop with 15g of Fuggles in Secondary  for 7 days before transferring to the keg for conditioning, priming/krausening it with 500ml of unfermented wort retained from the boil. All in all this beer looks like its a flyer imbued with lots od daring do and dashing good looks. Let's wait and see how it performs when called to duty and put into service.

The brew day was conducted outside, so we could monitor the bbq and the kids. Mash temp was a bit dance-y due to the wind factor: I might have to insulate the kettle next time. The pump worked like a charm and all in all this BIAB caper is shaping up pretty well. 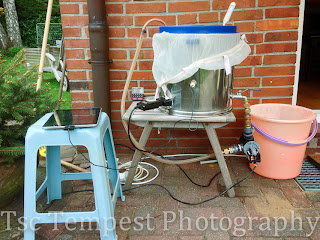 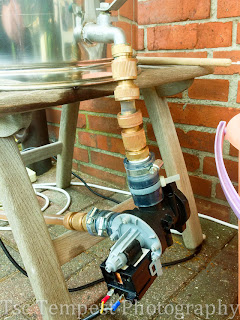 Now, I saw a vary poor video of some bloke using a dishwasher pum to circulate his wort a long while back and nothing since or by anybody else. It's what gave me the idea to do this and What A Little Bottler! Very quiet, very effective and for these small Urn based systems a very easy upgrade and enhancement to implement. You get more even heat distribution, nice clear wort and... basically its a poor man's Braumeister. Of course, there are a few things that still need to be done, on the protect it from water spills and leaks etc side of things but as a proof of concept, Bonza! 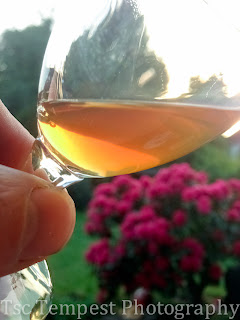 Here's the wort, end of boil, hed up to the light it's not as Red as it looked but I'm very happy with it. This is in the same area of colour as one of my favorite Czech beers: Krušovice Královský Pivovar.