well Spring is well and truly on its way and I'm starting to clear some space in my cellar. I have a medium sized Hobby Brewery up for sale and I'm looking for a buyer. Please share this link around:  http://kleinanzeigen.ebay.de/anzeigen/s-anzeige/hobbybrauerei-aus-edelstahl-/183887942-248-18568?ref=search I could use all the help I can get.

BTW here's a pic of the system: 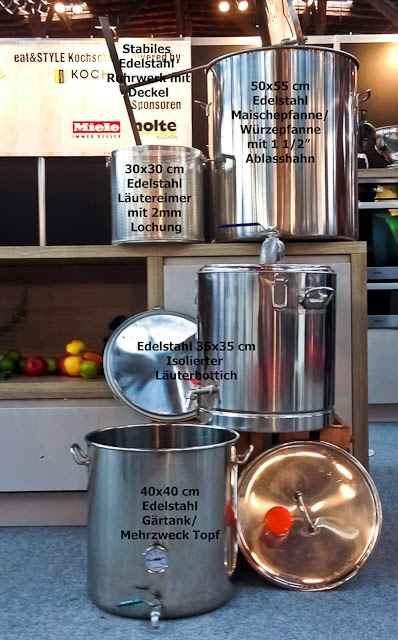 So the research continues, a bit like a dog with a flea that can't quite be scratched.

Hamburg Bier was a Weißbier or Weißen, that is it it was brewed with some wheat and the malt was air-dried. Apparently air-drying lead to the production of paler malts. The inherent sourness of Weißens came for lactorbacillus contamination of the barrels.

Beer barrels of the time were made of wood but had thicker staves than wine barrels, to help keep the pressure in, and were generally not scorched inside. According to correspondence with Ron Pattinson, beer makers didn't want the barrels to add a flavour component to the beer, so as neutral a wood as possible was used to make the barrels and usually a darker beer would have been used in the first few uses to remove any lingering taste contribution. Similarly, the barrels were so well made that salt water contamination is not an issue.

Hops, what hops? Apparently, around 1220 AD a customs ordinance for the city of Lübeck stated that hops carried into the city by The Wendes (Wendisch, Elbslawisch) were exempt from customs duty. Who were the Wendes? Well, apparently they were neighbours with Haibathu and according to Hans Michel Eßlinger in Handbook of Brewing: Processes, Technologies, Markets, the Wendes laid waste to Haibathu in 1066. Not much else is really known but apparently the town of Wendish Waren, near Stadt Goldberg in Mecklenburg-Vorpommern was established in 1292 as a farming village.

Now, according to our friend, Muessdoerffer, "... a hop garden in Geisenfeld near Freising mentioned in 736 AD is said to have been set up by Wendic prisoners of war." (Meussdoeffer, p11) This same garden is one of the oldest gardens in the Hallertau region. According to Deutscher Hopfen, due to the rise in prominance of brewing in the Hansa, Spalt became the first large scale hop growing region in Southern Germany. As a result, Spalt was conferred their first hop Seal for quality in 1538. Thus in all likelyhood, the primary, commercially used hops for brewing Hamburg Bier, were most likely hops grown around the town of Spalt. Today, we'd probaly use Spalter Select.